In 1965, Glendale Community College (GCC) was established to serve the higher education needs of the West Valley. Since then GCC’s student population has changed in a number of interesting ways. Here are five facts about how our student body has changed between 1980 (the most comprehensive data available) and 2014.

#1   GCC’s student enrollment headcount increased 65% from 1980 until 2014. During that time the number of Full Time Student Equivalents (FTSE) has increased 58%.

#2   One of the most drastic changes over the last 34 years has been the change in the racial/ethnic composition of GCC’s student body. The number of students who self-reported as being “white” has declined from 87% in 1980 to 47% in 2014. In contrast, the number of self-reported minority students at GCC went from 13% in 1980 to 53% in 2014. Hispanics had the largest percentage increase of 24% during that time span. 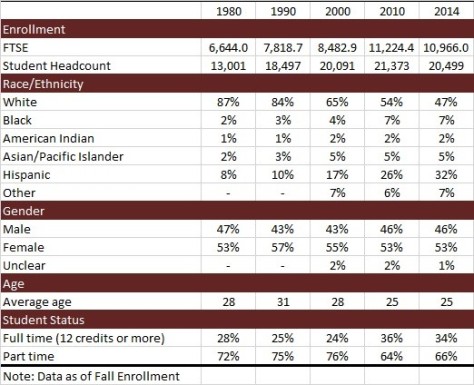 Get Your Kicks on Write 6×6